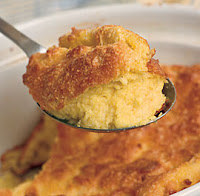 When we first met and Bill found out that I used to cook for a living, he told me that there was this one dish that his grandmother Viola (who was a fabulous cook) used to make for him when he was a boy, that was still his favorite thing in the world to eat. He complained that since it was an old fashioned kind of food, it was hard to find anyone who knew how to make it anymore. I bet him that I could guess what that hard-to-find favorite food was if he would tell me where his grandmother was from. He said she was from Virginia, I blurted out "spoonbread!" and the rest, as they say, is history. He later told me that he almost fell off his chair when I nailed it on the first guess, but he played it pretty cool at the time. I serve this with our homemade strawberry jam, and lots of butter.

Ingredients:
4 eggs, separated
1 cup cornmeal (preferably arrowhead mills)
3 - 4 cups whole milk (it depends on the kind of cornmeal you use. The finer grinds will absorb more liquid. If you use the larger amount of liquid, the baking time will be increased by about fifteen minutes)
1 tsp salt
1/4 cup sugar or more, to taste
2 Tbs sweet butter, plus more for buttering the dish and serving

Heat the oven to 350 degrees. Butter a 1 and 1/2 quart baking dish. In a large bowl, whip the egg whites until medium peaks form. Set aside.
In a mixing bowl, whisk together the cornmeal and 1 and 1/2 cups milk. In a pan, scald the remaining milk and then add the cornmeal mixture to it, whisking constantly until it begins to thicken, about 8 minutes.
Remove from the heat. Add the salt, sugar and butter. Stir in the egg yolks, one at a time. Fold in the egg whites. Pour into the baking dish. Bake for about 1 hour. The top will be a deep crusty brown, the spoonbread will be puffed up like a cornmeal souffle, and a toothpick inserted into the center will come out clean.
Serves 6
Posted by Backstory at 6:53 AM

Backstory
Bill always held out hope that someday he'd marry a woman who could make spoonbread like his grandmother. After a long and glorious bachelorhood, he finally found what he was looking for. Spoonbread For Hieronymus charts the beginning of our life together, one meal at a time.

Food blogs I Love to Read