Swiss Chard with Raisins and Almonds 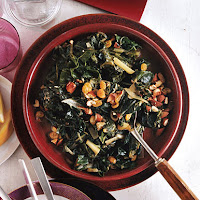 Cook onion with 1/4 teaspoon salt in 2 tablespoons oil in a 5- to 6-quart heavy pot over medium heat, stirring, until softened. Sprinkle with paprika and cook, stirring, 1 minute. Add chard in batches, stirring frequently, until wilted, then add raisins and water. Cook, covered, stirring occasionally, until chard is tender, about 7 minutes. Season with salt.

Cook almonds in remaining 1/2 tablespoon oil in a small heavy skillet over medium-low heat, stirring frequently, until golden, 3 to 5 minutes. Sprinkle almonds over chard.
Posted by Backstory at 8:01 PM

Backstory
Bill always held out hope that someday he'd marry a woman who could make spoonbread like his grandmother. After a long and glorious bachelorhood, he finally found what he was looking for. Spoonbread For Hieronymus charts the beginning of our life together, one meal at a time.

Food blogs I Love to Read